The Naked Truth About “Q”

Posted by Deb in Quartzsite, RV Shows on February 5, 2016 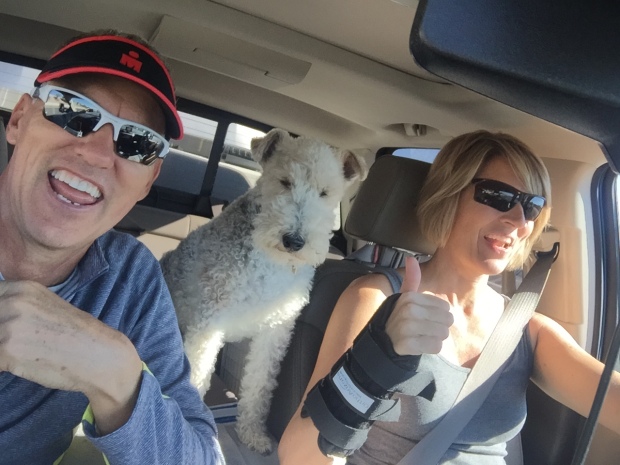 All hooked up and heading to Q

It’s been a while since my last post. Partly because of healing my wrist, partly because we have been stationary.

As new temporary residents of Mesa, Arizona we’ve become quite familiar with city streets, favorite Walmart stores, the local cycling club and yummy places for lunch. Even Sam has been in on the action for grooming and walking the canals.

But these RV’s are made for roll’in and roll’in is what we do!

After 3 months, we had to refresh ourselves on how to hook up the Domani. It felt odd to be pulling out of our temporary driveway with something a little bigger than a bicycle behind us.

But just like riding a bike, it all came back to us quickly. We were finally headed away from sirens, helicopters and thumping music of the city and heading towards yipping coyotes, running generators and whipping winds of the desert. 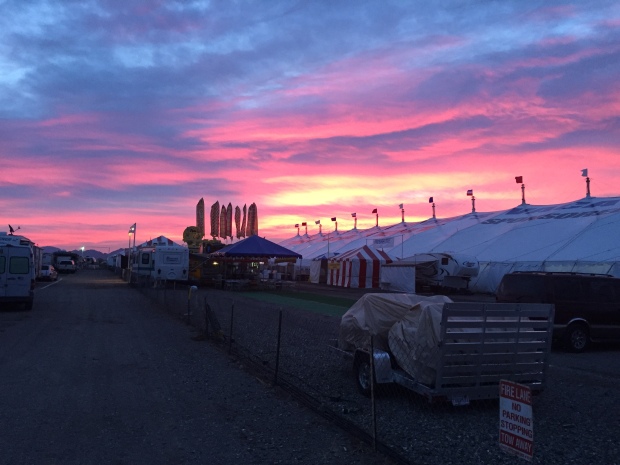 Sunrise over the Big Tent

The Quartzsite RV Show, or “Q”, is billed as the largest gathering of RV’ers in the world. Folks from all over North America come to the desert of “Q” for warm January temps and cheap RV living. “Q” is surrounded by unlimited BLM, making this quirky destination a playground for boondockers, solar enthusiasts and ATV’ers.

We were here last year working a booth for Dometic and we were here to do the same this year.

Working a booth at a RV show is a fascinating study in people. Especially RV’ers!

“Q” is always a different kind of show in that the majority (98-99%) of this audience is actual RV owners. And not just owners but what I would consider RV super users… those who live in their RV’s 6-12 months out of the year.

And with super users comes lots of experience and lots of stories! Usually experiences and stories that center around bathroom habits and holding tanks. 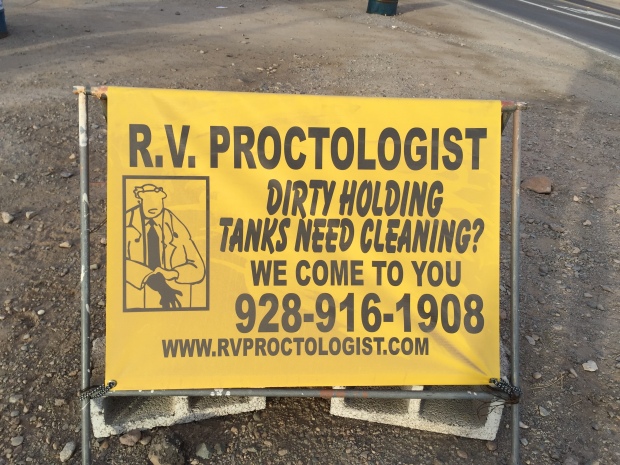 Gotta have a sense of humor if your going to RV

I had to laugh when a 70-something woman asked if we had any toilet seats that fit into a receiver hitch of a truck because, “I aint poop’in over a log no more”. I deferred her to Amazon…they have everything in two days or less for Prime membership.

One of our friends shared his story about emptying his black tank at a dump station. Unbeknownst to him, the dump was full which he didn’t find out until he saw his black water running all over the ground. After shutting off the valve he was left with suspending both ends of the hose in the air with his hands in order to contain the sludge until someone would let him dump in another line! OMG!!!

Other toilet discussions at the booth drove me to drink at the end of the day. And since I’m such a light weight, half way through a glass was sufficiently enough to regain my sense of humor.

On another funny note…did you know that Escapees has a nudist club? They sure do! And Jeff and I got a first hand look at it while delivering a Dometic portable refrigerator/freezer to their encampment…on BLM…in “Q”.     Y.U.P. 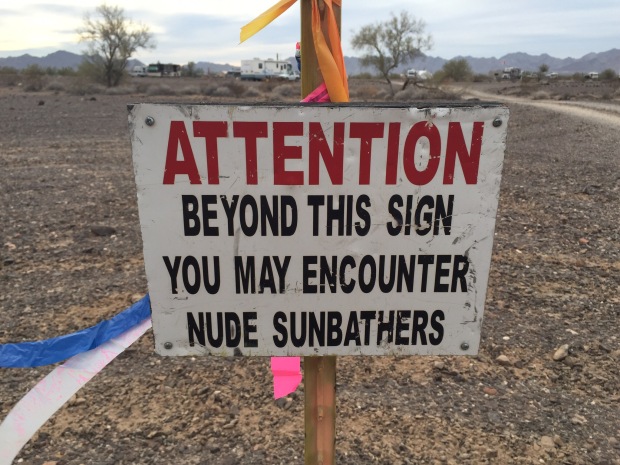 I offered to deliver the item as the purchaser was on a motorcycle and he happily accepted my offer. While being rung up he slipped in a, “oh-by-the-way”, and we were off to the nudist encampment hoping the cool temps and cloud cover would keep the in-the-buff RV’ers a bit more covered!

Of course the ONLY person that was not covered up when we got to the area was this nice gentleman’s wife…buck naked…in front of his coach.

Not being well prepared nor experienced in this sort interaction, eye contact was our top priority as well as a keen concentration to keep our jaws from hitting the desert floor. I was relieved when his wife offered to put some clothes on. But that relief was short lived when she returned with only a wrap around her waist. 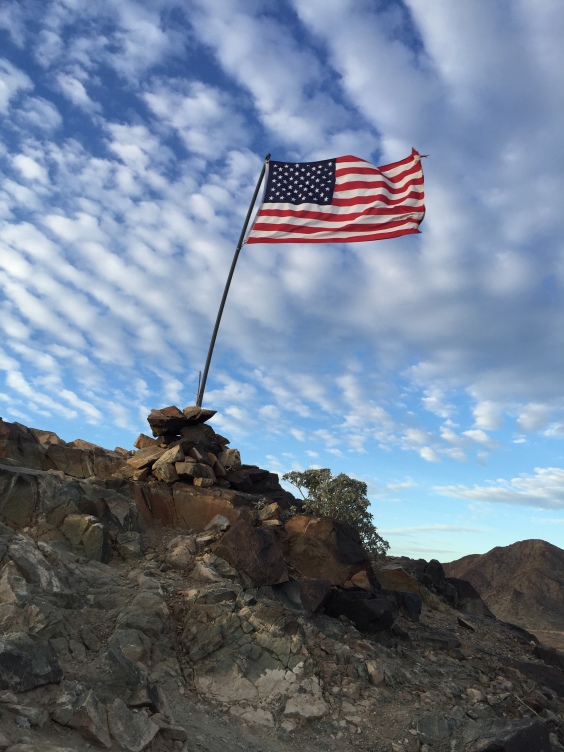 Oh look! An American flag on top of Q Mountain!

Introductions were made and a tutorial on how to operate their new purchase was given…topless…boobs a sway’in in the gentle breeze…bent over the freezer on the ground. There are just things you can’t un-see folks!

After declining their invitation for a beer we were treated to a boob photo bomb while having our picture taken with their rig logo. Yup…in her full glory…in the background of a picture her husband took with OUR phone.

Oh…could it possibly be that I now have seen it all? Probably not. 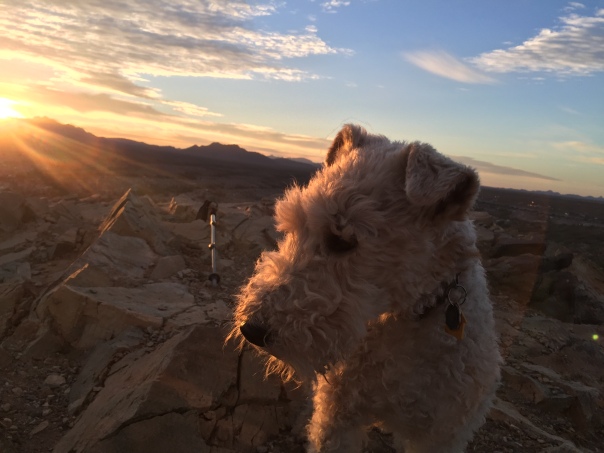 Jeff and I have had one other run in with nudists. It was on our honeymoon 22 years ago in Jamaica. The resort had a clothing side and a clothing optional side. When we arrive the first night we were informed that our room on the clothing side was not available despite our specific reservations.

The next morning our beautiful ocean front balcony view was marred by the bare butts of wrinkly old men strategically moving their lawn chairs directly in front of our room. Not the full moon over the water view I had in mind!

From my total of two nudist “shock-and-awe” incidents, I’ve noticed that nudists are not usually the bouncing six pack stacked Bay Watch type of people to be gazed upon with appreciation for the human form. But leathery sun worn bodies that have sufficiently been pruned over time. Just my humble unwanted observation!

Butt But you know what? More power to them!

It was an interesting time at “Q” as it usually is. We did see friends and managed to stay an additional week in beautiful desert BLM solitude after the show.

Nice hike in the desert with friend Donna

We had dinners, campfires and even watched football with John and Becky, my hiking buddy Marshall, Jeff’s new cycling buddy Don and his wife Debbie and Flying The Koop’s Mike and Donna.

The incredible desert sunrises and sunsets burned new images into my retina’s that I will carry with me as we head back to Mesa. Even the illumination of the full moon will forever be a memory too! 😉 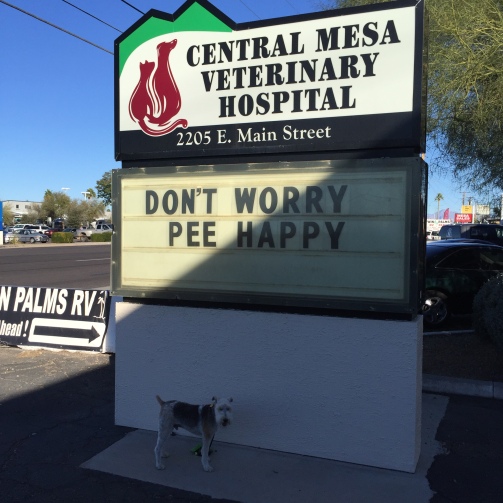