Catching up on the morning news

It’s been VERY wet here in Bentonville AR. We’ve been hammered with a lot of rain. So much so that Beaver Lake is at its maximum level of 1130ft. It’s been a few years since we have seen the lake this high…and we like it this way.

Beaver Lake was created by damming up the White River nine miles northwest of Eureka Springs Arkansas. It was constructed by the US Army Corps of Engineers from 1960-1966 and the lake did not reach its normal operational pool until 1968. It provides electricity, flood control, drinking water and recreation to the area.

With around 30,000 acres, 487 miles of shoreline and pristine clear water, it’s a popular place in the summer for sure.

My 87 year old neighbor, Ellis, told us about when the lake was going in that many cemeteries had to be relocated. He helped with digging up and moving some of the plots and commented that sometimes all they would find would be a pine knot or an old hipbone. Ellis spent many years fishing the white river and still refers to Beaver Lake as, “the crick”. (That’s hillbilly for creek)

The water is so clear on this lake that we have gone scuba diving with 25-35 feet of visibility. There isn’t much to see down there except a couple of house foundations and a school bus that was submerged to give divers something interesting to look at.

Jeff and I bought our first lakefront cabin here in 2000 and then sold the first cabin when we bought the neighboring cabin in 2009.

Our current cabin was built in 1968 right around the time that the lake was filling up. Back then dark paneling and pink appliances were all the rage. Jeff and I gutted the entire cabin down to the studs. And after 9 months of weekends and vacations working our tails off, we finally moved in to one of the cutest cabins ever, with one of the best views on the lake. But then again I may be a bit biased.

We love our time on Beaver Lake

Sam taking us for a spin

The cabin had been neglected for years and was another one of those smelly, dirty, rodent infested projects that left us scratching our heads at times. We had never seen more acorns and mud dauber nests INSIDE a house before. It took me a week to remove the dauber nests from the ceiling beams with a hand grinder. They had been beautifully baked and preserved through the years and were not coming down without power tools. Maybe that’s why we aren’t scared of a “little” RV project (see below).

While home this round Jeff and I signed up for the War Eagle Tailtwister 50k, 25k, 10k at Hobbs State Park (Jeff 50K. Deb 10K) on Beaver Lake. This is the only trail race allowed at Hobbs and is an amazing event run on some great trails through the hills of the Ozark Mountains. This was my first trail race and I definitely want to do another one. My favorite sport is hiking so this, for me, was a hike in the woods…only faster.

Jeff taking a load off at one of the aid stations. Hot, hilly and humid!

The course was a single track trail with around 600 runners. So navigating around other runners was a bit of a challenge. Mix in some poison ivy, heat, humid, drenching sweat, the taste of bug spray and a resident timber rattler at aid station #1, we had us a bonafide trail race in the Ozarks. (Banjo not included) 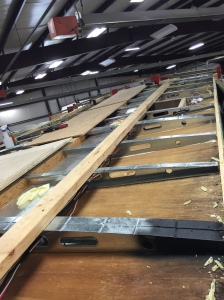 Jeff and I made a trip to Elkhart Indiana for a business trip and to check on the progress of our RV repairs.

We had little communication from MasterTech RV despite our emails and phone messages over the course of the last 4 weeks, which has been quite frustrating. We had a sense that not much was happening on our rig. But with our announced trip a fire was lit and they managed to get more done in two days while we were there than in the previous 8-9 weeks that it has been in their shop.

The mold has been sanded off the walls and new foam insulation has been sprayed. The top two inches of the walls at the roofline have been spliced in to replace all the rotten wood. Since the entire roof was leaking around the perimeter I noticed other inside walls that were warped. So out they came to reveal more mold and water damage. The smell continues to improve drastically with each removal of anything that resembles fabric or vinyl.

The flooring is now out of the RV, blinds have been removed and the new refrigerator, hot water heater and furnace have been installed. Since our long list of pre-wiring for things like audio video, wi-fi and solar had not been communicated by one of the managers, our roof still has not been installed because no work orders were produced instructing the guys what to do. So everyone moved on to other projects.

So we have met with the owner and have a new foreman who will oversee the rest of our project to ensure that it keeps moving in the right direction.

On a positive note, the work that we did see done is of really good quality and they are committed to doing things the right way.

We remain skeptical that it will all be completed by the first week in July. There is a pile of work that remains. We are still hoping to hit the road around July 6 to kick off our summer travels with RAGBRAI, the bike ride across Iowa.

Until then we remain cautiously optimistic. 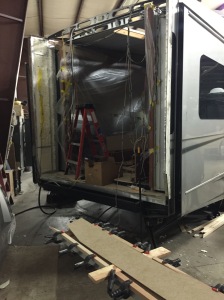 Does this foam make my butt look big?