So Jeff and I finished up a hard pressed 5 weeks of work responsibilities that took us from Las Vegas, NV to the northern coast of California. It was A LOT of miles with little sleep and sore rumps. Our schedule was rough (compared to FT RVing standards) but we did manage to experience some amazing places!

We attended the National Hardware Show in Las Vegas. This is where retailers “shop” for new innovative ideas displayed by suppliers from all over the world. Other than this show, Jeff and I really don’t have an appreciation for Las Vegas.

Jack Links…Feed Your GIANT Wild Side

It’s big and loud. For peeps who like to take in scenic runs and prefer dirt of dusty trails it’s just not our kind of place. But sometimes you just do what you gotta do!

We stayed at the Circus Circus RV Resort, which was 1.4 miles from the Hardware Show on the north end of the strip. We picked this park for convenience over amenities so our “camping” was a parking lot with full hookups.

Despite being in the city we found our stay to be quiet, especially since we ran the fan on the air conditioner all night. I’m not quite sure what the neighbors were up to but I did notice a shoe on the roof of their RV one morning. 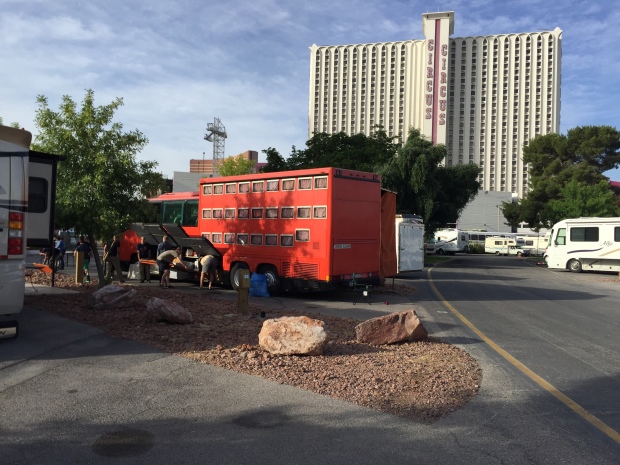 Interesting people and rigs at the Circus Circus parking lot

Our RVing buddies Donna and Mike Kuper from Flying the Koop were in Las Vegas for the show as well and we had a quick dinner together before we all went our separate ways.

After the Hardware Show we had to zip over to the West coast for a company photo shoot. The shoot took us to Pacifica, Carmel, Santa Cruz, South Lake Tahoe, Auburn and San Francisco.

Jeff jumped on a plane in Vegas for a quick transition to San Fran while I made my maiden solo voyage in the RV. Though I do 80% of the driving, this was the first time I was alone for the trip. It really felt like the very first drive I took after I got my drivers license.

The training wheels were off and I had to make decisions on gas station approaches and clearances and conflicting GPS routing all by myself. I survived the drive and was reunited with Jeff a day later in Santa Cruz.

We stayed at the Santa Cruz Ranch RV Resort for it’s central location. It also happened to be within a mile of Jeff’s high school swim coach.

Jeff and our beloved Coach

Jeff grew up in Sacramento and started swimming in high school. His coach would take a group of swimmers to his parent’s trout farm in Santa Cruz every summer. This was the start of Jeff’s career in the Junior Lifeguard program that he still talks about today.

Coach is retired now and lives on that same trout farm, even though the fish are now long gone. But what he lacks in fish he has made up in feathery friends. He has geese, exotic chickens, parakeets and turkeys, all squawking to be fed twice a day.

Coach is a part of Jeff’s family and even though our time was tight we did have an opportunity to have breakfast together and feed his plethora of animals.

We had a day of shooting in Pacifica and another day in Carmel. We roped some RVing buddies John and Becky into using their RV at some stunning locations. One spot was on private property on the cliffs of the Pacific Ocean. WOW…what a location!

I had some heartburn watching our friends take their very nice Class A motorhome 4-wheeling on this rough farm property. The photographer wanted the RV as close to the edge of the cliffs as possible so I held my breath just hoping the RV would not roll right off the cliff into the water!

4-Wheeling in a Class A

John and Becky relaxing during the shoot

We spotted a pod of whales and a shark chasing a sea otter. The water was turquoise blue, the sun warm and the sunset unobstructed. IT. WAS. MAGICAL!

Since the photo shoot would last into the dark we approached the property owner to let us camp on his property until morning. He graciously agreed and we spent the night in our friends RV being lulled to sleep by the crashing waves. Best boondocking spot EVER!!!

Funny story though. While one of the models was changing in the RV the sliding bedroom door got stuck and we couldn’t get the model out! John had to climb in through the emergency window and work on it for 20 minutes before they both could be freed. 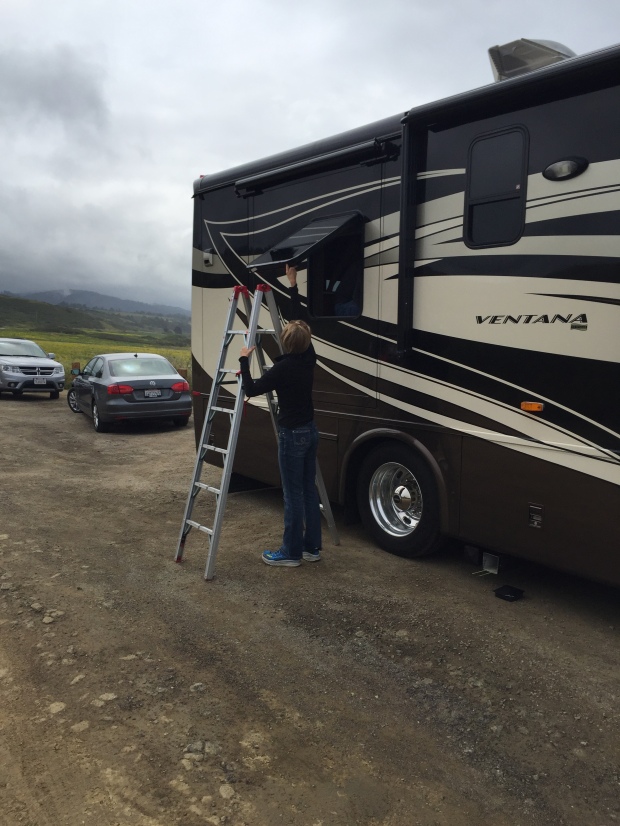 John climbing through the emergency window to save the day!

We wrapped up our Carmel stop with giant strawberries from a roadside fruit stand and big breakfast at Lou Lou’s on Monterey Fishermans Warf. Jeff and I found this little place years ago while Jeff was working for The Scotts Miracle Grow Company. They supported a Walmart junior golfing event a Pebble Beach for 3 years and heard about this place from a local.

The servings are huge and they have a special pancake called The Hubcap. And yes, it is the size of a hubcap! Get there early to get a seat before the line starts to back up around 9:15AM.

“The Hubcap” at Lou Lou’s Griddle in the Middle

Our next stop was at various locations around South Lake Tahoe. We stayed at the Zephyr Cove RV Resort on the Nevada side of the lake. This was a wonderful campground with a delicious restaurant and beach just across the street on the edge of the Lake.

In 1980-something Jeff swam across Lake Tahoe in a relay. Freezing water made for an unforgettable experience! 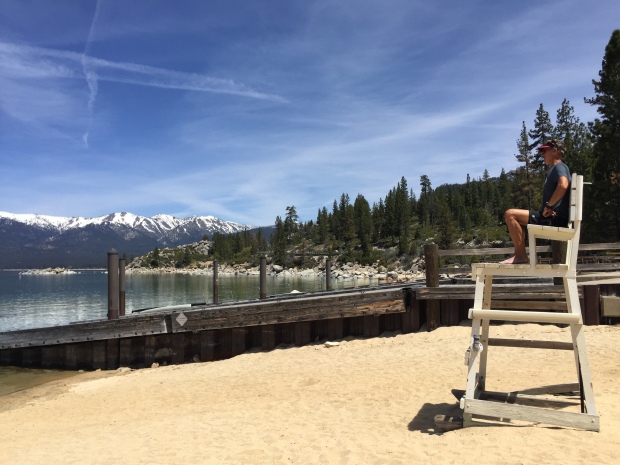 We had asked one of Jeff’s high school friends, Sabrina and her significant other Roger to be models for the photo shoot at this location. This gave us time to get reacquainted since high school. They both recently retired and are adventurous people, so playing hikers in the woods of Tahoe was not a stretch for them!

Sabrina and Roger (R) talking to the photographer

Tahoe is one of my all-time favorite summer places to be. Cold nights and warm days, the smell of pine needles and the sound of wind pushing through the trees…all rejuvenating to my tired soul. But alas, our time was short and we had to get to the next location.

Jeff headed to San Francisco with the team while I had pulled the RV to the Roseville just NorthEast of Sacramento so that we could visit with family while we were in the area.

Jeff heard about an epic race called, “Bay to Breakers” that was being run the day he would be in SF. It’s a 12k race that started in 1912. And in typical SF fashion it’s known for its nude runners, costumes and salmon runners who run the race in the opposite direction. 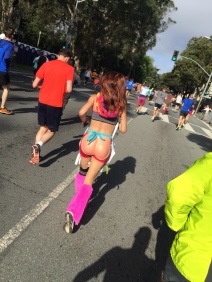 Jeff also got to squeeze in a visit with our nephew and his fiancé’ who just moved to SF.

In the mean time I was having some challenges finding a place to park. After calling 5 RV parks I found a spot at the Roseville Fairground RV Park. It was a bit rough there and after spending one night Jeff’s cousin insisted that I relocate to their driveway in Loomis. 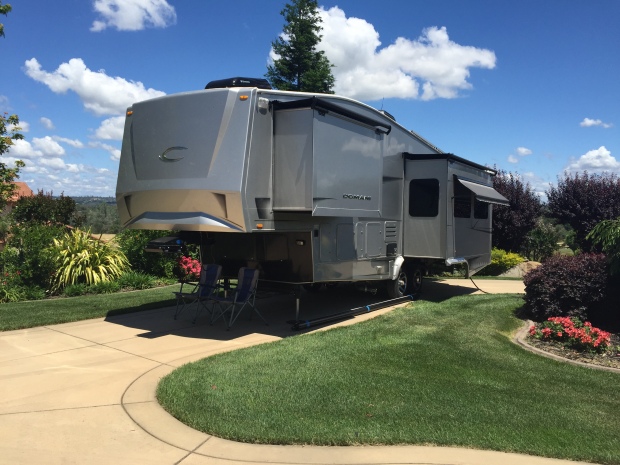 Driveway surfing at its best!

Steve and Vicki were over-the-top lovely hosts and I parked here over a week while Jeff wrapped up the photo shoot and flew off to another event in Flagstaff. I loved my time here with wonderful family. I got a personal tour of the town of Loomis, had some delicious meals, drank more wine than I have in a long time ever. It was a joy to visit and we look forward to getting together again in the future.

It was 5 weeks in a pressure cooker and we were ready for a break. I had made reservations at the Yosemite Ridge RV Resort over Memorial Day week so I can’t wait to show you what we did there!

See you in Yosemite! 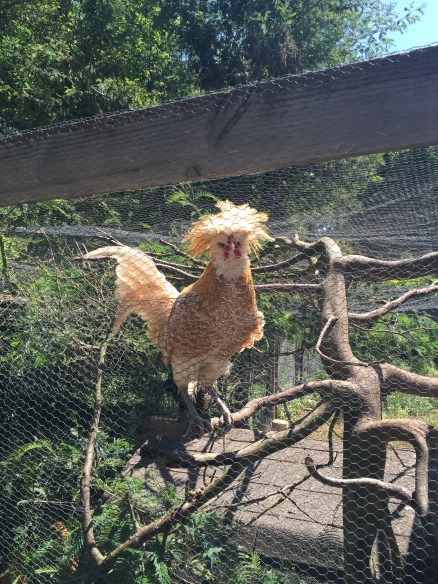